Panama is blessed with an abundance of sunshine and rain, allowing it to entertain renewable energy sources as the sole source of it’s electric supply.  Nonetheless, it continues to depend on a couple of carbon-based plants for its electrical demands, and the local energy authorities are under fire for proposed taxes and charges on solar power producers.

In late May, the headlines regarding the ASEP decision were all along these lines:  “While the rest of the world looks to consume and produce clean energy, the Panamanian Government – through ASEP – is trying to PUNISH anyone who installs solar panels or other clean energy generators in their homes or businesses.” 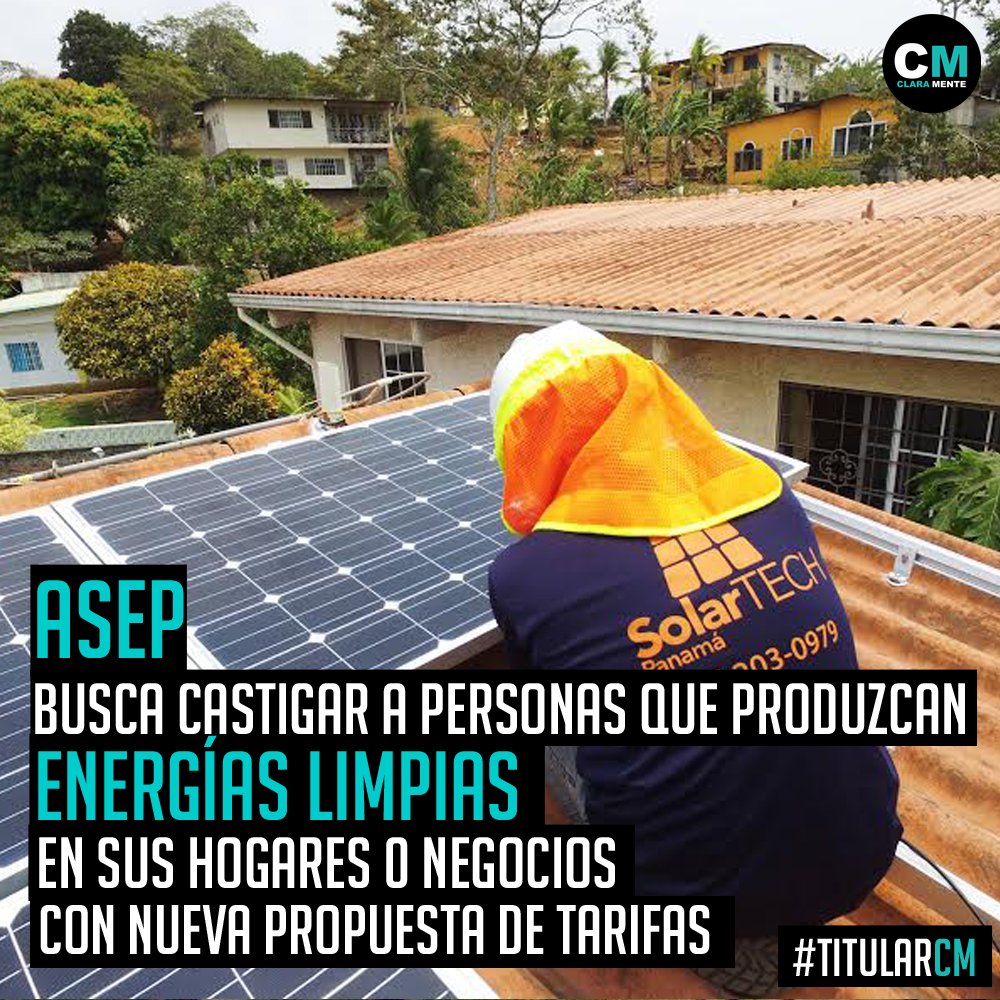 At the beginning of June, ASEP opened the dialogue, indicating that they did not intend to penalise those who had solar panels for personal consumption, but that they were looking to ensure that anyone that was connected to the electrical network and infrastructure was paying appropriately for the infrastructure, and not simply getting a free ride simply because they principally had solar panels or other self-generating systems.  There was also criticism because of the pricing suggested out the outset for those who were generating more than they needed and were feeding this excess into the general network.  This ignores, in part, that since February of 2017, Panama has had its first commercial solar power plant “Central Fotovoltaica Bugaba“.

In April 2015, the Panamanian Government published the 2015-2050 National Energy Plan which sought to place a new focus on solar and wind sources, rather than the traditional sources of hydro and carbon generators.  By 2050 it is hoped that Panama will rely, 70% on renewable energy (primarily wind & solar).  The move away from hydroelectric power comes after serious confrontations with indigenous groups and communities over the devastation and changes to the ecosystem.

For example, if you have a quick look at the following video, you can appreciate the Tabasará river during a normal rainy season (before the hydroelectric plant was built).

The two videos that follow are during the construction of the power plant on the Tabasará river, where you can appreciate the devastation down-river to the entire ecosystem and the change that this has generated for all of the communities that depend on the river.  Obviously, the videos of the construction are during the dry season, rather than rainy season (so it is no longer a raging river in full flood), but as you will see in the second video, the communities downstream from the project were left with almost stagnant water.

The communities also denounced and complained that they were being displaced from their homes and communities. Obviously, this had economic repercussions for these communities, as they lose their farm lands.  Even those who previously used the river for rafting and outdoor adventures during the dry season have said that they have totally closed down the Tabasará option and have had to find other rivers for rafting and adventure.

In a similar manner, Nata & Aguadulce were left without a drinking water supply when the local hydroelectric plant shut off their access to water during the summer of 2016, because the 2015 rains were not enough to fill up all of the reserves.

In 2016, the ASEP took steps to support and promote solar panels in homes and projects.  At this time, ASEP promised users that they could reduce their consumption by 50% or even up to 100% through the installation of solar panels on the roofs of their homes or businesses.  Nevertheless, there were requirements for this, which involved the local electric companies:

The electric company was then to install the bi-directional metre, (not to be charged to the consumer) which would compensate the output and input, measuring the net usage of the client of electricity and that produced by their system.  In these cases, the homes were not installing batteries or storage units, as the excess of their production was pushed back into the system for usage by others in the network, and then they consumed electricity when their solar system was not producing.  These were not stand-alone or self-sufficient units.

Later in 2016, the ASEP informed that it might consider a limit of 500kW for residential production of solar power and then (after consulting the public and users) notified that it would not be doing so, but rather it would be leaving that to each homeowner to decide what production and consumption they required.

Is it really worth it?

Costs in 2016-2017 were still prohibitive – for a home consuming 500kW hours/month, the cost of installation would be approximately $9,800.00, which meant that the investment would be paid off in about 7-8 years. In 2018 we see the costs for a home consuming 400kW hours/month having installation costs of $4-5,000, almost half of the cost for 2016!  However, as many of those living in Panama know, our electric bills are quite high, so as those costs of installation come down (which they have over the past 24 months), solar power becomes more attractive as a residential alternative.  This is especially the case with those companies that are providing a 25-year guarantee on their panels!

Throughout 2017, ASEP continued to promote solar power for residential use, touting the benefits of being able to hook into the distribution system and get paid for any over-production.  And so we now (Feb 2018) find Provivienda (one of Panama’s real estate developers) offering a subdivision in Arraijan in which all homes come with their solar panels installed and connected to the system. This subdivision is expected to be completely self-sufficient to the needs of each home.

The regulations provide that where the consumer is using no more than they are producing (and supplying into the network), then there is no charge to them. Where their solar plant provides more electricity than what they have consumed, then they can expect to receive a payment from the electric company for up to 25% of their consumption (but no more).  So, for example – you produce 500kW/hours, but you only consume 400 – you will get paid on that 20% extra that you produced.  You consume 500kw/hour and you only produced 400 – you will have to pay the electric company for the consumption!

Smaller companies have already begun to invest in solar power plants, for commercial purposes, such as “Central Fotovoltaica Bugaba“.  2017 say some 72.4MW come online and 2018 some 78.8MW are expected to receive their commercial licenses and approvals for production.  For 2019-2021, a further 200MW have provisional licenses to build and come online.  There are already mini solar plants in Azuero, Llano Sánchez and Chiriqui.  If with all of these projects, they generate the estimated 383MW (with an investment of $422M over this period 2017-2021), this would be more than the production of Fortuna (which produces 300MW and is the largest in Panama so far).  The issue for Panama is the rainy season, because this brings down production to almost 20-40%, with a higher production during the dry season.  Therefore, most of the solar farms are located in the “arco seco” – the “dry arch” – in the Azuero Peninsula.

Anyone who has driven out to Penonome from Panama City has appreciated the wind farm on the left-hand side of the highway.  As of March 2018, construction of a second windfarm in Cocle is under way, this one in Taobré.  This wind farm will have 20 Vestas turbines and 2 substations, and is expected to be built in 22 months.

Roll forward to February 2018 – and the ASEP announces that all bids for energy projects “from now on” will be on an equal footing – with no special exceptions being given for clean energy.  That means that the gas / thermo plants (such as those in Colon) will be competing cheek-to-cheek with solar and wind farms.  It would seem that this gives the thermo/carbon/gas projects an upper-hand as they are less capital intensive.  But the ASEP assures that this is not the case, because they will have to quantify and provide a bond covering the possibilities of contamination. So, while a solar plant will have a low contamination factor, the gas or thermo plants will have to adjust theirs costs to include for accidents and liabilities.

Roll forward to May 27, 2018, and everyone is in an uproar because it seems that ASEP now wants to start TAXING residences and businesses that have installed solar panels (connected into the system and producing energy for the system). On May 27th, they indicate that they are considering an “additional charge” to anyone that has solar panels on their home or business.  However, they didn’t go into what this “additional charge” was, which caused a massive back-lash as I mentioned at the very beginning of this article.

Given the reaction from the public and from conservation groups, ASEP took a step back, defending itself with “you didn’t understand what I said”.  They never did quite clarify what it was that they had said!  On the 1st of June, this then rolled into “we are not going to make any decisions on this until we have reached a consensus with all of the parties involved”.

Eventually, what came out was the following explanation:  if you have solar panels and are self-sufficient but you are still connected to the network, the distributor must have available at any and all times enough electricity for your home/business.  So, let’s say you need 400kW hours/month – they must produce enough for that.  But, since you have your solar panels, you aren’t actually using it and are not paying for it.  They want to charge for having it available to you, but you not using it!

Putting a tax on the sun

The reaction from some of the players (particularly owners of companies installing solar panels) was that the government was looking to put a tax on the sun!  Others point out that this clearly is a dis-incentive towards clean energy and favors the production of cheap oil/gas-based thermo electricity, rather than making the long-term investment into solar panels and self-production.  If the government wants private persons and companies to make the capital investment into solar power, then they cannot consider putting an additional tax on it.

The ASEP justifies their proposal as being simply a charge on those who are producing energy and pumping it into the network (and getting paid by the electric company for this).  But that’s not what they said they were going to tax. I’m still waiting for the dust to settle (maybe after the world cup fever has subsided next week), to find out what ASEP has really decided or whether the “let’s reach a consensus” is underway.

With a new Metro line being finished in 2019, more electricity will be needed to run that! More buildings = more air-conditioners running. In a country in which 35% of the electricity goes towards air-conditioning, maybe it’s time for Panama to look not only at how it produces electricity, but how it can reduce wastage or improve geothermal covering of buildings to harness the energy!

Maybe it’s time to explore alternative options like turbines that create electricity simply from moving traffic (of course, that would mean that Panama’s traffic would need to move!).
https://www.facebook.com/plugins/video.php?href=https%3A%2F%2Fwww.facebook.com%2FInTheKnowWanderlustByAOL%2Fvideos%2F463043554144777%2F&show_text=0&width=476

There are few voices (and even less articles) discussing the alternatives for the central business district, hotels and banks to contribute to the solution to the needs over the coming years.

But there is so much to learn and there are no tax incentives for businesses to make these capital expenditures on long-term returns.

If there are less than 250 residences in all of Panama (in 2018) with solar panels, can I really expect that people will be forward thinking about what we need to do in order to work towards a solution?

One thought on “Renewable energy in Panama”